With Easter meetings looming on the horizon combined with the lack of rain, the build up to the weekends fixtures resulted in runners being thin on the ground at Andoversford on Sunday afternoon, but this was not the only meeting to suffer that problem.

Jason Warner’s presence was sadly missed but his daughter Marita Warner-King, her sister Rhonda and their mother Sue kept the “show on the road” and had the fixture running smoothly from start to finish. Despite this workload the family still had time to have runners in the first two races, but unfortunately for connections both horses were beaten in their respective contests. The recent Cotley winners Geoff Barfoot-Saunt and Mister Dick teamed up in the Members but had to play second fiddle to the favourite Stay Out Of Court.

The Warner silks have been a familiar site on local courses over the last 35 years, but Donald Smith colours have been around longer than that, having been successful in the Members at this meeting at Andoversford back in 1967. Stay Out of Court and Mister Dick set a modest gallop during the first half of the race, with the favourite steering a wide berth in search of better ground. The order remained unchanged until Stay Out of Court started to inch clear as they hit the rising ground, and securing a good run around the final bend stayed on resolutely to win by three and a half lengths. Stay Out of Court joined Julian Smith’s yard at Tirley from Westbury on Severn trainer Adrian Wintle and had his first run for his new stable when finishing second at Kingston Blount back in February. This was a first success on her second ride for the trainers daughter Jessica.

The Warners were represented by Fubar in the GX Landrovers sponsored Maiden, where he renewed his partnership with Peter Bryan who had ridden him so positively at Howick. The 8-year-old had failed to complete the course on his last two runs but put in a clear round on this occasion, but a mistake at the last sealed his fate and he was caught close home by Hung Jury. Bryan had Fubar in a handy position throughout and racing down the back straight held a 3-length advantage over the opposition, but making the final climb the leader started to come back to his rivals and this was where Hung Jury’s stamina came into play. Hung Jury’s persistence paid off on the run in where he got up in the final strides to win by a neck, and said much for his courage, as Fubar seemed to hamper his rival at the last and that meant the Stewards would have had to make a judgement into potential interference if Hung Jury had not prevailed. 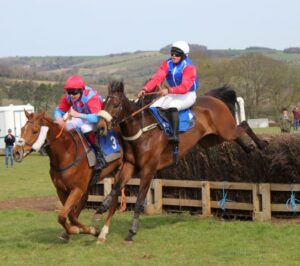 Charlie Poste, representing his wife Francesca, stated in his pre-race assessment” the horse has had a few setbacks and I think he will be better going right-handed and he has a good chance if they don’t go too quick”.

The PPORA Cornbury Festival sponsored Conditions, provided another winning opportunity for the Area’s Leading Horse Ellipsism. The commentator suggested the 7-year-old was not enjoying conditions as he was never jumping with any fluency, but that did not prevent him drawing well clear of his solitary rival Brown Bear throughout the final circuit. Having established a clear lead he had no difficulty maintaining that advantage over the final two fences. Winning trainer James Ridley strengthened his grip on the Area Title when he saddled Chase Me who walked over in the Mens Open to provide Joe Neal with his first success.

Just two horses turned out for the O’Brien/McPherson Racing Ladies Open, with both runners coming across the bridge from Wales. The scenery must have been familiar to Dandy Dan who used to be trained just up the road by Kim Bailey at Thorndale Farm. The 9-year-old won a similar event at Howick and had little difficulty seeing off the challenge of Ancient Empire after going well clear of his rival at halfway. He jumped impeccably throughout and could be one to note if he makes Final of the Lorna Brooke Memorial race at Chaddesley Corbett on June 2.

Six runners lined up for the Black Horse Syndicate Conditions which closed the meeting at 5.05 pm. Evron and Robin Why Not vied for favouritism, while The Devils Drop who had hardly featured at Guilsborough received minor support. Elliott England Robin Why Not adopted their customary front running tactics, but the pace set was such that all the runners were still in contention going out onto their second circuit.

Thomas Drewry had bided his time on The Devils Drop but shot into a clear lead racing down the back straight for the final time, but the chasing pack began to close up passing the start. The Devils Drop held a narrow advantage at the penultimate, cornered well and held the challenge of the fast-finishing Evron in the home straight to provide his 49-year-old rider with his first win on his second ride. Drewry, who works in the media in London and is based in Kensington described it “as an incredible feeling” on a horse that jumped superbly throughout. He was bought out of Alan King's stable at Goffs in January.