Heigh Ho, heigh ho, it's off to Wales we go, but not just yet

Wales may be closed off to Englishmen just now for their Covid "firebreak", but if there's one racing event you should watch in Wales, it has to be the wonderful card built around the Welsh National two days after Christmas. Lord knows, we may need some entertainment by then, and lockdowns permitting, it'll be the first time a majority of us will have crossed the Severn Estuary in some months.

Of the races on the Welsh Grand National card, the Coral Finale Juvenile Hurdle is a foretaste of the blistering pace of the Festival 12 weeks later, packing tons of interest as well as giving some pretty clear pointers to the JCB Triumph Hurdle. There will be early pointers to the Triumph at next weekend's November fixture at Cheltenham, but as the winter progresses, the juvenile division contenders become more clearly defined, as the summer's big season finds are brought out to play by the leading yards.

A Grade 1 2m National Hunt race, the Coral Finale Juvenile Hurdle is not as demanding as the Welsh National but still deserves some consideration and concentration on the soft ground of Chepstow. Winners of the Coral Finale Juvenile Hurdle are usually ones to watch out for as the calendar goes on, especially at Cheltenham and at Aintree in April. If you are considering keeping a long shot look at the trends and how the past winners at Coral have fared, you can look at the favourites and previous races of the Grand National meeting at Aintree on grandnational.org.co.uk. It is worth keeping an eye on all the available data, as the Coral Finale is the only Grade 1 race for three-year-olds before they turn four less than a week later.

The Coral Finale Juvenile Hurdle was first held in 1971 and is part of the Welsh Grand National card, a star attraction especially for punters in the festive season. As with any event in the latter part of the year, the event is visited by unpredictable and foul weather conditions, but nothing that does not add to the excitement.

The typical underfoot conditions at Chepstow in December make this a tricky race for Festival predictions. In fact, since 2000, only Defi Du Seuil has won both the Finale and Triumph. He proved the dominant horse of his generation, following up a month later in the Anniversary Hurdle at Aintree, but again, ground conditions at free-draining Aintree mean that just 3 horses have concluded the mid-winter Aintree double - Walk On (2009), Defi Du Seuil (2017) and We Have a Dream (2018). 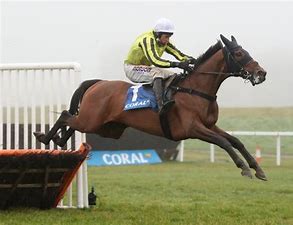 The £65,000 prize fund guarantees a top flight field. It's a race for favourites too, with a scarce upset of the odds coming only in 2013 when Richard Johnson rode Le Rocher to victory at 11/2.

The pedigree of trainers here should be an indication of how much importance is paid to the Coral Finale Juvenile. Last year’s winner, Allmankind, impressed in the Coral Finale, winning by 37 lengths. Honours are fairly evenly shared among trainers, with Henderson (4), Alan King (2), Paul Nicholls (2), Nick Williams (2) sharing recent honours. The race has been a favourite with the French, used as they are to precocious juveniles, and whilst there hasn't been a French-trained horse since Thierry Doumen sent over Good Bye Simon in 2006, names like Le Rocher, Bristol de Mai, Adrien du Pont, Defi du Seuil, and Quel Destin tell you something of the recent dominance of early maturing French-breds on this division.

However, with the Irish generally keeping their juveniles under wraps on the other side of the Irish Sea until March, you can't make accurate international comparisons here. Don't expect to see a runner from the Mullins or Elliott stables at Chepstow, as they have their own big events over Christmas and don't need to endure a troublesome Channel crossing.

While the list of runners is still to be declared, a few names such as Gordon Elliott's Quilixios, yet to be beaten in 3 runs, Hell Red, Paul Nicholls' Chepstow winner, and French-trained Paros, winner at Dieppe, have been toutedand are names to watch out for when entries are made. Expect the likes of Nicky Henderson to produce some likely candidates once December comes around. It never pays to bring Triumph candidates out too early.